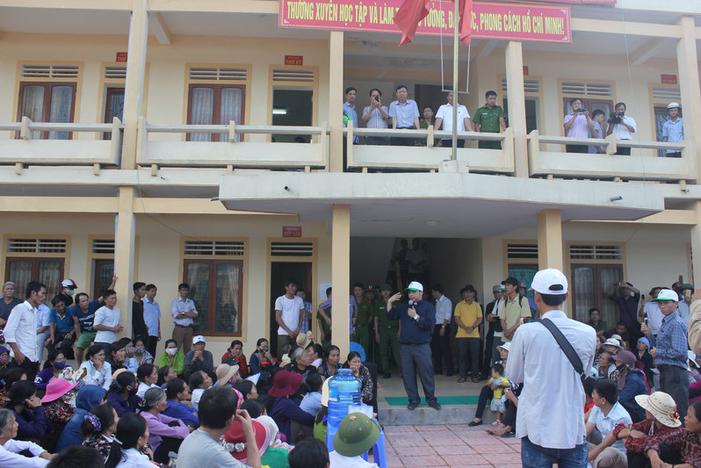 … About 5,000 people from the town gathered outside the courthouse on Monday to show their support, he said.
( Scroll down for more English Version)

The factory, owned by Formosa Ha Tinh Steel Corp (台塑河靜鋼鐵興業), said in June that it was responsible for the pollution that killed large numbers of fish off the central Vietnamese coast in April, and pledged to pay US$500 million to clean it up and compensate affected people.

The pollution created the nation’s worst environmental disaster, devastating the regional fishing and tourism industries, and sparked protests in Vietnam.

Catholic priest Dang Huu Nam, who led the group of fishermen, said 506 petitions had been submitted to the People’s Court in Ky Anh town, Ha Tinh Province, where the massive fish kill occurred.

“Based on the fact that Formosa admitted their mistake, based on the Vietnamese laws and the losses suffered by the fishermen, they have submitted their claims and they demand that Formosa be closed and compensate their losses, as well as material and health losses they may suffer in the future,” Nam said by telephone from the courthouse.

The priest said many more fishermen are completing their files and he expected more than 100,000 fishermen to file petitions.

He said the fishermen on Monday traveled 200km in 15 buses to the People’s Court in Ky Anh, which received 199 petitions on Monday and another 307 yesterday.

About 5,000 people from the town gathered outside the courthouse on Monday to show their support, he said.

Nam said the court would decide whether to process or reject their claims, or refer their cases to a higher authority.

Under Vietnamese law, the claims must be filed individually.

Lawyer Tran Vu Hai said the fishermen’s actions to file their claims may not lead to their cases being brought to trial, but could open a way for Formosa and the fishermen to “talk directly with each other” for a negotiated deal.

An estimated 115 tonnes of fish washed ashore along more than 200km of the central coast in April, the government said in a report to the National Assembly in July.

The disaster harmed the livelihoods of more than 200,000 people, including 41,000 fishermen, it said.

Hundreds of Vietnamese fishermen traveled to a small provincial court on Monday to sue one of the country’s biggest investors for compensation over an accident at its $10.6-billion steel plant, activists and a court official said.

Tens of millions of fish died in April, in one of Vietnam’s biggest environmental disasters, which the government blamed on a discharge of toxic waste into the sea by Formosa Ha Tinh Steel, a subsidiary of Taiwan’s Formosa Plastics.

A total of 545 people are suing the company, Dang Huu Nam, a priest leading the group that journeyed 200 km (120 miles) by bus to a town in the central province of Ha Tinh told Reuters in a text message.

“The court is receiving their files,” an official at the Ky Anh People’s Court said by telephone. “It is very crowded here.”

In a video posted on social media site Facebook, Nam said fishermen still feared the sea was polluted and were suffering hardship.

“They cannot go to sea and cannot catch fish while they face the prospect of hunger because of bank debts,” he added.

The disaster unleashed a public outcry on social media and on the streets of big cities. Demonstrators vented their fury at both the government and Formosa, accusing them of a cover-up.

Such protests have been a headache for the authorities, who have accused anti-government groups of trying to exploit the disaster and stir up anger, with the aim of overthrowing the ruling Communist Party.

Monday’s mass lawsuit captured attention on Facebook but was not covered by state-run media.

Activists said Monday’s convoy of more than 10 buses was closely monitored by police, with military also deployed around Formosa’s project in Ha Tinh.

Several thousand Christians gathered around the court and sang songs in support of the fishermen, the priest said, adding that the court was only able to process half the lawsuits filed but would receive more on Tuesday.

Formosa is one of Taiwan’s biggest conglomerates. Its listed units include Formosa Plastics Corp and Formosa Chemicals & Fiber Corp. 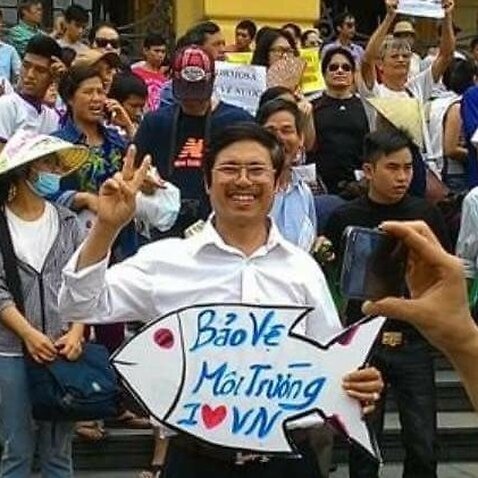